The Yankees tied a major league record with five home runs in an inning and hit six overall in a 10-8 win over the Toronto Blue Jays on Thursday night that extended their winning streak to eight. 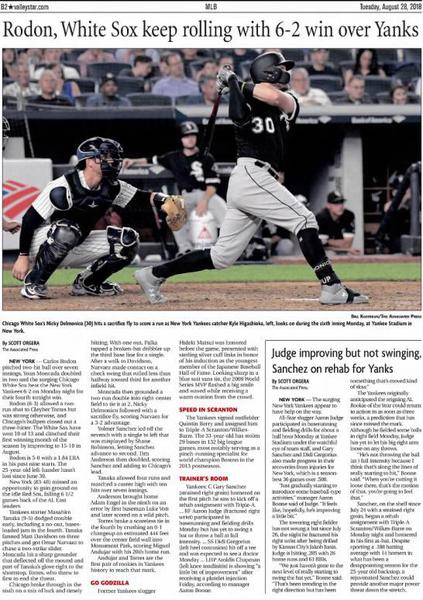 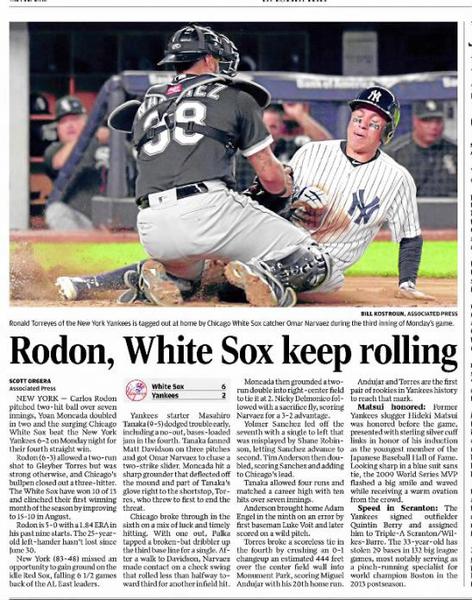 Yankees Bounce Back Against Orioles, Win 8-3

No one will accuse Aaron Boone of sleeping on the job. Coming off a rugged extra-inning loss that stretched past midnight and cost his team four players to injuries and illness, the new Yankees manager didn't have much time to prepare for Saturday afternoon's game. 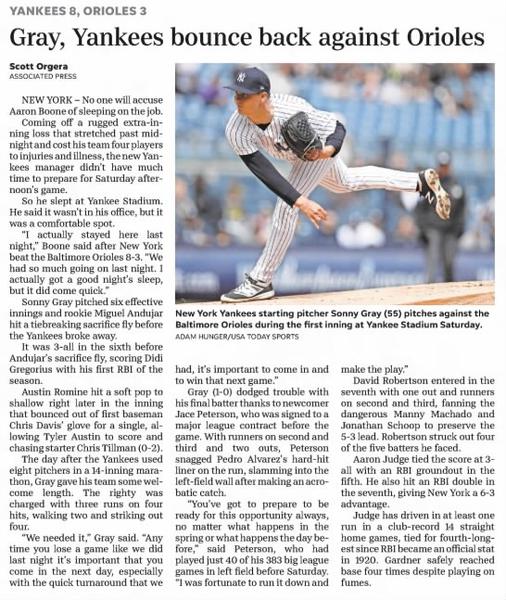 Gray, Yankees Bounce Back Against Orioles

No one will accuse Aaron Boone of sleeping on the job. Coming oﬀ a rugged extra-inning loss that stretched past midnight and cost his team four players to injuries and illness, the new Yankees manager didn’t have much time to prepare for Saturday afternoon’s game. 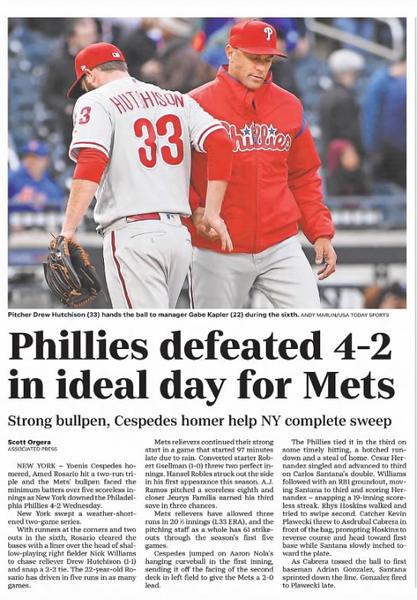 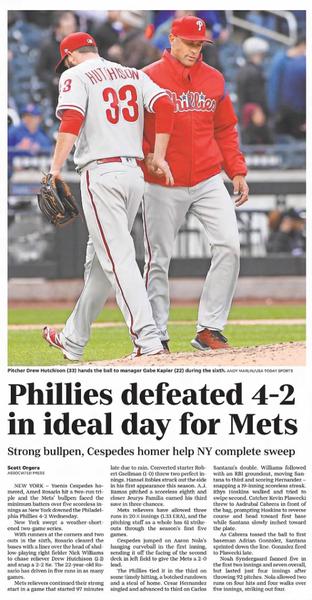 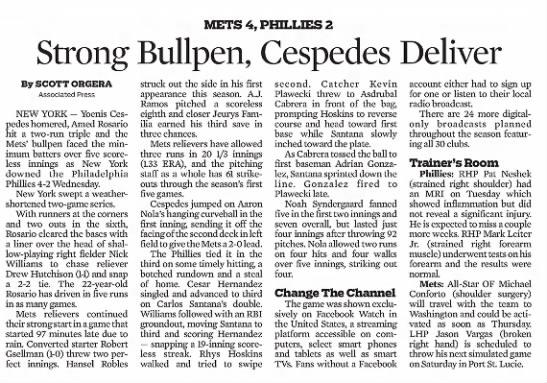 Coming off a 70-92 season, the New York Mets hired a new manager and hoped for better luck this year. Even though it's still really early, this is what they envisioned. 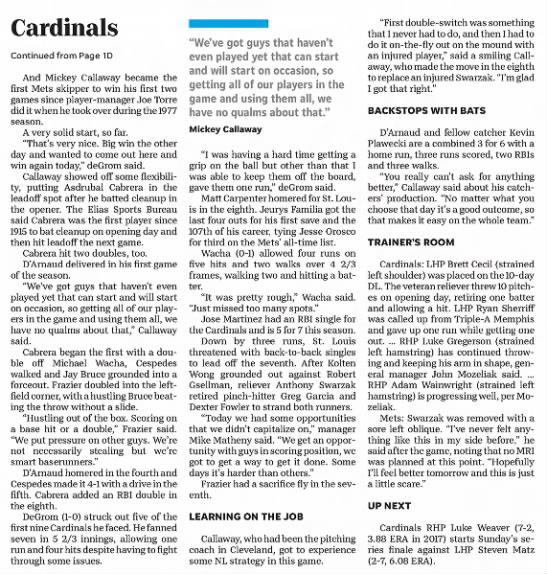 And Mickey Callaway became the ﬁrst Mets skipper to win his ﬁrst two games since player-manager Joe Torre did it when he took over during the 1977 season.

Coming oﬀ a 70-92 season, the New York Mets hired a new manager and hoped for better luck this year.

Rusty Staub was a huge hit on both sides of the border. Instantly recognizable for his fiery orange hair and gregarious personality, the outfielder who charmed baseball fans in the United States and Canada... 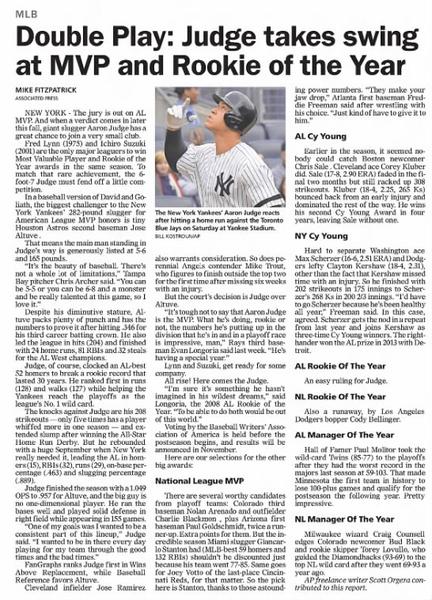 Double Play: Judge Takes Swing at MVP and Rookie of the Year (Contributor)

The jury is out on AL MVP. And when a verdict comes in later this fall, giant slugger Aaron Judge has a great chance to join a very small club. 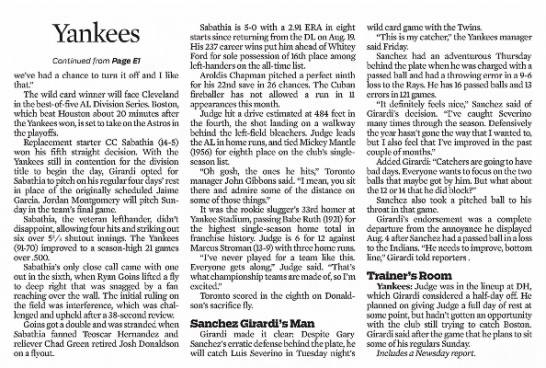 Girardi's Club Kept Plugging Along (2 of 2)

The wild card winner will face Cleveland in the best-of-five AL Division Series. Boston, which beat Houston about 20 minutes after the Yankees won, is set to take on the Astros in the playoffs. 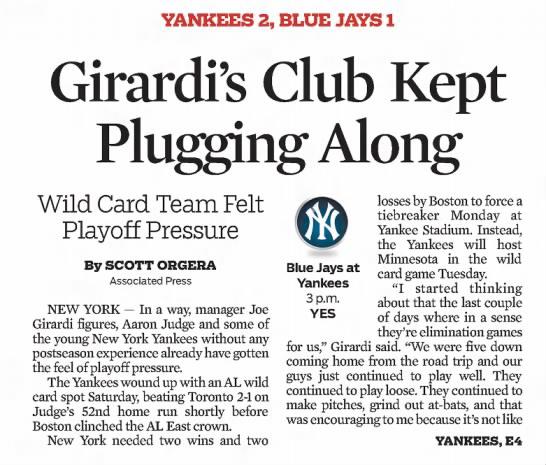 Girardi's Club Kept Plugging Along (1 of 2)

In a way, manager Joe Girardi figures, Aaron Judge and some of the young New York Yankees without any postseason experience already have gotten the feel of playoff pressure. 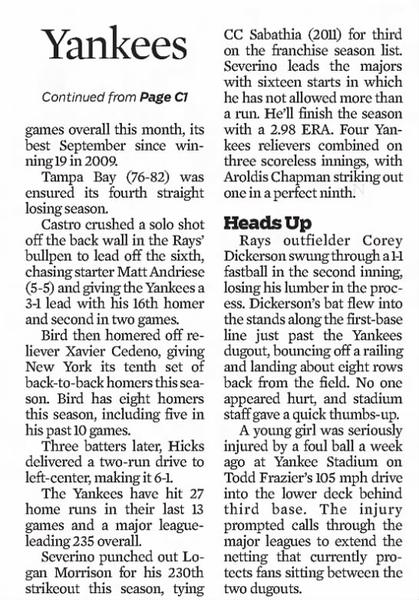 Castro crushed a solo shot off the back wall in the Rays' bullpen to lead off the sixth, chasing starter Matt Andriese (5-5) and giving the Yankees a 3-1 lead with his 16th homer and second in two games. 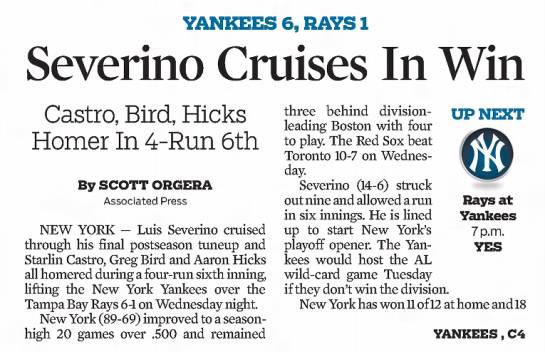 Luis Severino cruised through his final postseason tuneup and Starlin Castro, Greg Bird and Aaron Hicks all homered during a four-run sixth inning, lifting the New York Yankees over the Tampa Bay Rays 6-1 on Wednesday night.

Yankees Power Their Way to Fourth Straight Win (2 of 2)

Baltimore has lost nine of 10 as it continues to fall out of playoff contention. Montgomery (8-7) scattered four hits in his fifth start against the Orioles this year. 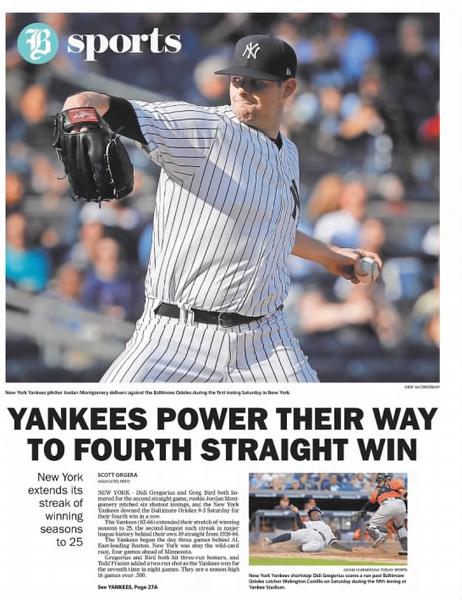 Yankees Power Their Way to Fourth Straight Win (1 of 2)

Didi Gregorius and Greg Bird both homered for the second straight game, rookie Jordan Montgomery pitched six shutout innings, and the New York Yankees downed the Baltimore Orioles 9-3 Saturday for their fourth win in a row.

A day after CC Sabathia sounded off on a Boston bunt, small ball was still causing a big back-and-forth between the New York Yankees and Red Sox. Sabathia got riled Thursday night when Eduardo Nunez dropped a bunt, which the pitcher threw away for an error.
Load More Articles
Close ✕